Since March 2015 there has been a significant cluster of rabid racoons identified along the Northern edge of Franklin Country (New York), very close to the border with Ontario, Quebec and across the river of Cornwall ON. The most recent case was found in Quebec, only a few hundred meters from the Ontario border. Distribution of wildlife rabies vaccine baits has been completed on the US side, and is currently being done in the bordering areas of Ontario and Quebec (south of the St. Lawrence) as well.

This is a reminder to veterinarians, particularly in Eastern Ontario, to remain vigilant for cases of domestic animal exposure to potentially rabid animals. The last case of racoon rabies in Ontario was detected in 2005, and the last case of fox rabies was detected in 2012.  However, there continues to be risk of incursion of fox rabies from Northern regions of the province and of raccoon rabies from New York State. Contact with rabies bats also remains a risk in all regions.

Reminder of who to call in cases of potential rabies exposure:

Additional Information for the public:

Order all of your pet care needs easily online at our store, we have a wide variety of products available. We want you to have the selection of the best products.

*Hours may differ due to COVID-19 – currently closed on Saturdays* 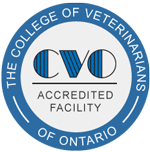